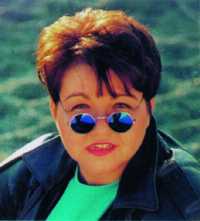 “My message or philosophy is a sort of Buddhist idea. Accept yourself as you are wherever you are even if in a painful and dark place. That accounts for such diversity in styles on the album, I try and tap into all emotional states.”

Nobody could ever accuse Norine Braun of being stuck in a rut. Her fifth CD, Now & Zen, is a highly eclectic mix of spoken word and rap, industrial beats, and classical arrangements featuring piano and exquisite strings. In fact, her music touches on just about every genre, flowing seamlessly from one musical style to the other with each track somehow fitting against the next comfortably.

“I have loved listening to music since childhood,” says Norine Braun of her eclectic tastes. “I enjoy all styles of music. I think I began composing at an early age, around 12 or so.” While neither of Braun’s parents were professional musicians, they did try to foster a love of music in their daughter through their own example. “We had a large record collection, and music played a lot at home,” she says. “I also had an older brother who played guitar and taught me rhythm when I was 10.”

This love of music definitely comes through on Now & Zen. Throughout the album, Braun (www.norinebraun.com) sounds comfortable with whatever she’s doing, whether it’s singing or reciting poetry. The album itself sounds important, as though the composer had an actual message she was trying to get across. And, in a way, she did.

“My message or philosophy is a sort of Buddhist idea,” says Braun of her album. “Accept yourself as you are wherever you are even if in a painful and dark place. That accounts for such diversity in styles on the album, I try and tap into all emotional states. Now & Zen is really about my personal spiritual journey. For me, spirituality is complex. Sometimes it is about knowing myself, healing myself, going through my life rather than around it, feeling all my feelings, owning all my parts the good and the bad, the absurdities of religion and the peace I long for and well mostly just being in the moment.”

She goes on to explain, “The song ‘Jade’ was inspired by the novel The Jade Peony, which for me is about family and secrets and culture and how that affects who we are. Now and Zen is self explanatory. ‘Intimate Hour’ is about therapy (healing or self exploration or desire for wholeness), while ‘Buffalo Nights’ is about the desire to escape and have fun and find my place. ‘J’en Suis Desolee’ is about movement as spiritual practice.”

The rest of the album tracks cover ideas as powerful as the reflection of ego, sexuality, divinity, and the importance of love. “‘Be Brave’ was a song I wrote a couple of weeks after my father’s death, 2 years ago,” she adds. “I was trying to make sense and be brave of losing someone I love and of my own immortality