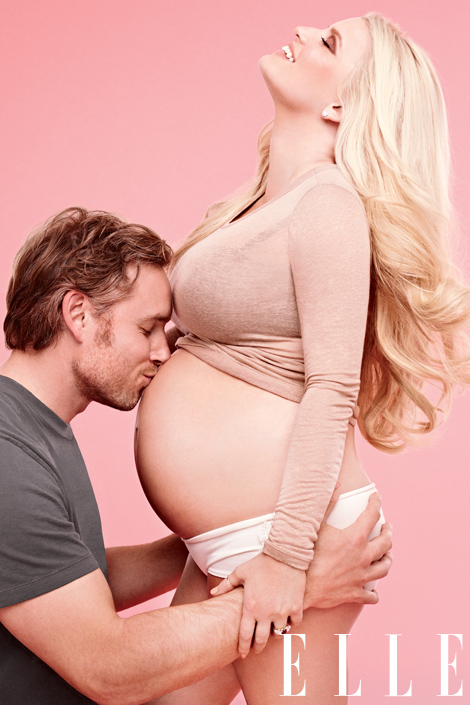 Jessica Simpson follows behind Demi Moore, Britney Spears and Christina Aguilera in a sexy mother-to-be pose. Unlike her predecessors who posed for different magazines, Jessica Simpson will be baring it all in a photo featured in her spread for ‘Elle’ during her first pregnancy.

The singer, fashion design and actress,k who announced that she was pregnant in October of 2011, revealed the sex of her baby in the new April issue of Elle magazine as “she.”

According to Jessica Simpson, 31, she’s afraid fiancé Eric Johnson (NFL free agent) genes will dominate and her daughter will not be a fashionista like her and will instead ask for Nikes instead of Christian Louboutins.

“Ah swear, ah I will croak if she asks me for a pair of Nikes instead of Christian Louboutins!” Jessica Simpson told Elle Magazine.

Jessica Simpson also believes that her daughter will be athletic due to Eric being athletic which inturn will make her not be able to take her daughter shopping.

“… all she’s gonna want is sports bras and Nikes!”

Also in her interview, Jessica Simpson talks about her father being an adolescent therapist and her not wanting to follow the footsteps of the teens that she was seeing him treating.

“I grew up very strong! You know, my father used to be an adolescent therapist. I remember sitting at his office, watching the girls walkin’ in and out. Kids doin’ coke at 16…heroin. Pregnant at 14. I could see what I didn’t want to be.”

In other news, Jessica Simpson will be making a surprise visit on the NBC fitness reality show The Biggest Loser come March 13, 2012 as a fashion mentor. Jessica Simpson will be awarding one of the contestants and another competitor of their choice, during an ice challenge, a shopping spree which will all come from her fashion line.

Whitney Houston Leaves Everything To Daughter Bobbi Kristina In Last Will