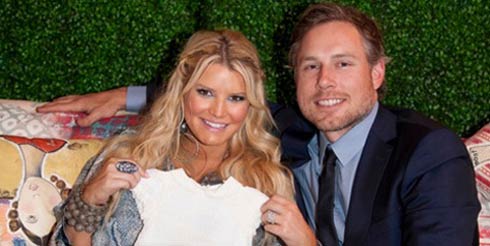 Singer, fashion designer and business woman Jessica Simpson can now add mom to her list of duties after finally given birth and keeping everyone in suspense. The singer gave birth to her newborn daughter at the Cedars-Sinai Hospital on Tuesday morning and named her Maxwell Drew Johnson.

Maxwell Drew Johnson weighed in at 9 lbs. 13 oz. measuring 21 3/4 inches, Jessica Simpson revealed with the world via her official website.

In a message to her fans and visitors, Jessica Simpson stated that herself and fiance, former NFL player Eric Johnson, are grateful for all the love, prayers and support that the two have been receiving since the news was released on the birth of their daughter Maxwell Drew Johnson.

Jessica Simpson, 31 and Eric Johnson,  32, got engaged after six months of dating in November of 2010. After becoming pregnant, the two put their wedding on-hold and opted to wait until Maxwell Drew Johnson’s arrival.

Meanwhile, ex-husband Nick Lachey, who was a member of the band 98 Degrees, is stated to have sent his ex-wife Jessica Simpson a basket of gourmet sweets (cookies) to celebrate the birth of her first child. The two were married from 2002 to 2005.

Baby Maxwell Drew Johnson’s birth joins the ranks of hot celebrities babies in 2012 such as Beyonce Knowles and Jay-Z’s daughter Blue Ivy Carter, who was born earlier this year on January 7th.

Gladys Knight Eliminated From ‘Dancing With The Stars’ 60 lbs Lighter