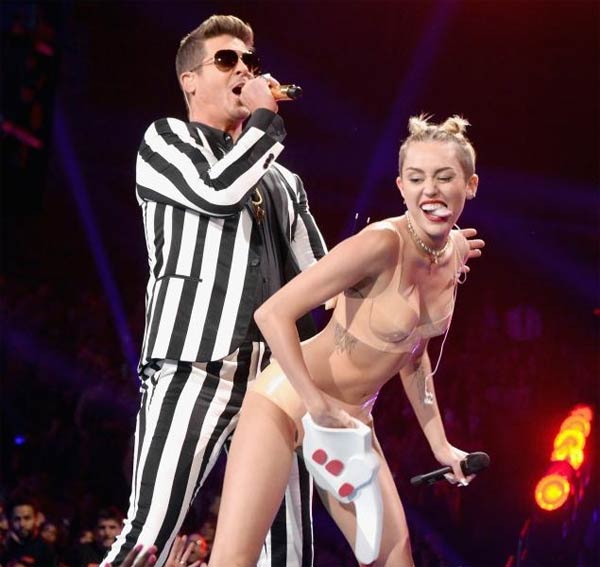 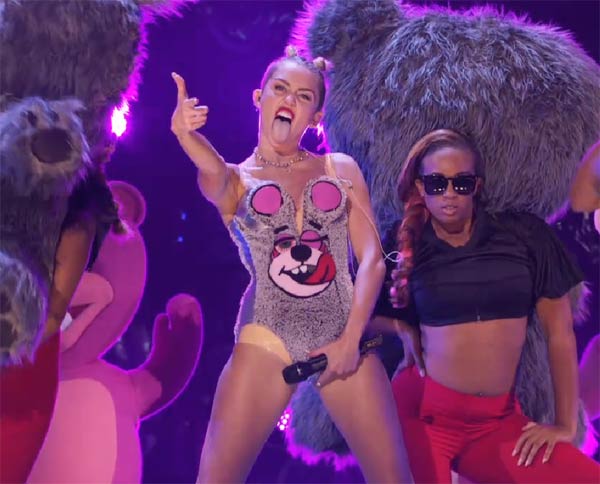 On last night, Miley Cyrus gave the world something to talk about in her infamous twerking performance using a foam finger and Robin Thicke at the 2013 MTV Video Music Awards.

Prior to her performance, the singer was questioned on the red carpet on if fans and viewers would get some twerking from her and she replied with we would have to wait and see. And did we all see!

As the singer made her way on stage from an enormous teddy bear, the Pop star wore a nice little furry one-piece bathing suit which had the face of a bear licking out it’s tongue which she mimicked throughout her performance.

Mid-way through the performance of her song “We Can’t Stop,” she stripped off the little furry suit down to a nude colored bikini.

The song suddenly transitioned to R&B singer Robin Thicke’s song “Blurred Lines” as he emerged onto the stage.

Miley Cyrus became quite touchy throughout the performance by constantly using her foam finger to rub on Robin Thicke who even got his own personal twerk dance from the singer on stage as she licked out her tongue.

During Miley Cyrus’ performance, she drew a slew of negative responses which many included Amber Alert jokes on Twitter because many felt that she was trying to be adult but came off more immature than anything.

Celebrities such as comedian Bill Maher poked fun at Miley saying that he hadn’t been at a strip club in a while and was glad to see that nothing had changed.

Meanwhile, the performances that took place during her twerking seemed to have somewhat went unnoticed such as 2Chainz and Kendrick Lamar.

Check out the video of Miley Cyrus’ solo performance and her performance with Robin Thicke.