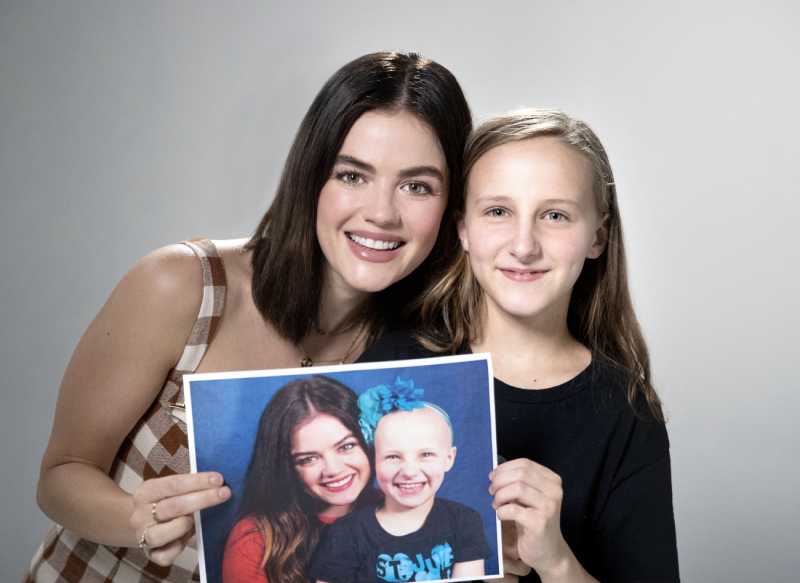 Hale, a Memphis native and longtime supporter of St. Jude, recently came back to visit the hospital and was greeted by a surprise guest, Bailey, a patient she first met during her 2014 visit as a celebrity supporter. Connections such as that motivated Hale to lend her voice and social influence to St. Jude for the month of September.

“St. Jude has always had a special place in my heart,” Hale said. “Everything about this hospital—the research advancements that are freely shared around the world, the incomparable treatment and care, the emphasis it places on the entire family—gives hope to those going through the toughest time of their lives. It is an incredible honor to be a part of such a mission.”

St. Jude is leading the way the world understands, treats and defeats childhood cancer and other life-threatening diseases. Since it opened its doors more than 50 years ago, treatments invented at St. Jude have helped push the overall childhood cancer survival rate from 20 percent to more than 80 percent, and it won’t stop until no child dies from cancer.

“Our sincerest thanks to Lucy Hale for playing this pivotal role for us during Childhood Cancer Awareness Month,” said Richard Shadyac Jr., President and CEO of ALSAC, the fundraising and awareness organization for St. Jude Children’s Research Hospital. “The lifesaving mission of St. Jude has been a key part of Lucy’s life since she was a child growing up in Memphis, and we are so pleased to have her serve as our ambassador and equally thankful for everyone who is joining her to support us in September and throughout the year.”

Hale also will be lacing up her running shoes to take part in the St. Jude Walk/Run to End Childhood Cancer, along with tens of thousands of other participants in 65 communities around the nation. Joining Hale to further amplify the movement will be a team of St. Jude digital influencers from several U.S. cities who will rally their followers to raise awareness and support at the local level. Thanks to that support from generous donors, families never receive a bill from St. Jude for treatment, travel, housing or food—because all a family should worry about is helping their child live.

St. Jude Children’s Research Hospital is leading the way the world understands, treats and defeats childhood cancer and other life-threatening diseases. Its purpose is clear: Finding cures. Saving children.® It is the only National Cancer Institute-designated Comprehensive Cancer Center devoted solely to children. Treatments invented at St. Jude have helped push the overall childhood cancer survival rate from 20 percent to more than 80 percent since the hospital opened more than 50 years ago. St. Jude won’t stop until no child dies from cancer. St. Jude freely shares the discoveries it makes, and every child saved at St. Jude means doctors and scientists worldwide can use that knowledge to save thousands more children. Families never receive a bill from St. Jude for treatment, travel, housing or food – because all a family should worry about is helping their child live. Join the St. Jude mission by visiting stjude.org, liking St. Jude on Facebook (facebook.com/stjude), following St. Jude on Twitter (@stjude) and subscribing to its YouTube channel (youtube.com/user/MyStJude).